It’s been a while since the last post and I was hoping to have long since reported that the ICF foundation had been poured! Alas, I cannot say so yet, but if the weather co-operates the concrete will go in on Thursday.

So what has been going on since the last report?
• Lots of rain! We’ve had to call-off or shut down work a few times, then there was the aftermath of heavy, clay-encrusted work boots…fun!
• Working on taller walls with ICF takes longer (at least for first-timers). The alignment/ scaffolding system takes time to set up and to work from.
• Adding reinforcement (“scabbing”) to the forms at custom joints has been more time-consuming than anticipated.
• Placing penetrations for ground loops, electrical entry, well piping, solar heat dump piping and rainwater conveyance systems. The rainwater conveyance system required close attention and planning so that it could move water from the North to South sides with a gravity-induced flow, yet avoid all the rebar in the walls and not freeze in the winter.
• Prepare the site with ladders and scaffolding to make getting around quick and easy during the pour.

On top of these things, we’ve also: 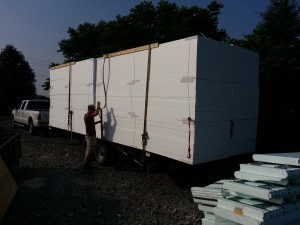 • Received a shipment of EPS (expanded polystyrene) rigid insulation. The 53’ trailer arrived today (in the 30°C heat) and we offloaded it by hand (see picture of stacks by the back fence). That was about 2/3 of the total order. The other 1/3 was moved on our flatbed (see picture of Nick releasing straps). The EPS will be used in the basement under the floor, augmenting the walls, in the root cellar ceiling, and in the thermal storage tanks. There are various densities of foam for use in applications that will be under different pressures. Some is even strong enough to support the columns that hold up the main beam.
• Built a hot wire foam cutting table. As yet it is untried, but we have great hopes! Think of it like a table saw with a hot wire for a blade. It will cut in horizontal and vertical axes and will also have a chopping capability. Or so the theory goes….but of course it will work!

On another note, we’ve had a few drop-ins at the site and inquiries about builds for other people. It is all welcome. I’m sure that you’ll understand that drop-in discussions have to be managed expeditiously as it usually means being taken off-task.

However, for those interested in a full site visit and briefing you will be well-served by one of the Open Houses that we plan to host in the autumn and once the house is completed. The autumn events will take place once the roof is up so that everything will be more tangible and less susceptible to the weather. And there is also the blog if you want to ask a question or offer an observation. You can post a comment for Anney or myself to review and post.

And there is also the blog if you want to ask a question or offer an observation. You can post a comment for Anne or myself to review and post.

Here’s to a Thursday pour!

New Sign is Up – and it looks amazing!
ICF Poured, Milestone Reached!

One Response to Updates on a Few Things